In January and February 2019 the mere thought of running never appeared. As soon as I finished listening to Can’t Hurt Me by David Goggins I transformed into a runner. I started to run almost daily in May. My current running streak started on July 22nd.

I didn’t plan to do this. I had no goals. It happened on its own.

I’m a numbers nerd so what follows are a few stats from the streak. I ran:

What follows are some tips I’ve gleamed during my running streak. They may or may not apply to you.

Run in all temperatures to find your sweet spot. For me, running in the heat is easier than running in the cold. I’ve run numerous times when the wind chill was in the single digits and also when the heat index was in the 90s. The cold is miserable. It’s exhausting. It pierces my nose, mouth, and lungs. It numbs my fingers and makes them itchy. On the other hand, the heat has never been too extreme. Sure, temperatures in the 90s under sunny skies isn’t ideal but it’s far from misery. Over the past 6 weeks I’ve learned that 75 degrees is my sweet spot. Thus, I run longer distances when the temperature is in the 70s.

The climate matters. This includes the temperature but also the humidity, UV Index, cloud cover, and I’m sure a few other things. Keep this in mind the next time you are trying to set a personal record or feel more fatigued or out of breath than usual.

Warm up before running. I’ve realized more and more over the past month how important warming up is. I aim to get my heart rate to 100 bpm before starting my run. I do push-ups, squats, lunges, knees to chest, and various other things that I don’t know the name for. I also walk fiercely or jog before starting my run.

Slow the fuck down. When I ran in 2009 and 2010 I was always racing myself or others. I wanted to beat my time every time. I hated it. I was exhausted. Today, I follow the 180 Method by keeping my heart rate as close to 148 bpm as possible for most of my runs. Running now energizes me and brings me joy. My speed is increasing at a steady pace with little effort.

Run mindfully. Run without headphones, earbuds, or AirPods. Pay attention to your breath. Feel your feet colliding with the pavement. Feel yourself sweating. Notice pain and be with it. Listen to the sounds from you and others that pass by. View the scenerey no matter where you are. Recognize the mere fact that thoughts are emerging out of the ether. I’ve run dozens of times while listening to music, a podcast, or an audiobook. Running mindfully leads to a more joyful and rewarding experience.

Engage in walking meditation immediately after running. For me, this is a continuation of my run. I’ve been doing this over the past 6 weeks and the experience has been profound. I rarely run without some pain and thus this becomes the object of my post-run meditation session. I walk at a slow pace.

Practice yoga after running. During the first few months of my streak I had consistent hip pain. It wasn’t enough to stop me from running but was close. Within a few weeks of increasing my yoga sessions from 15 minutes to 30 minutes, my hip pain vanished.

Sweating is healing. Remember this the next time you think it’s “too hot” outside to run. The more I sweat the more invigorated I feel and the more rewarding each run is. My body feels looser and in less pain the more I sweat.

When will my streak end? 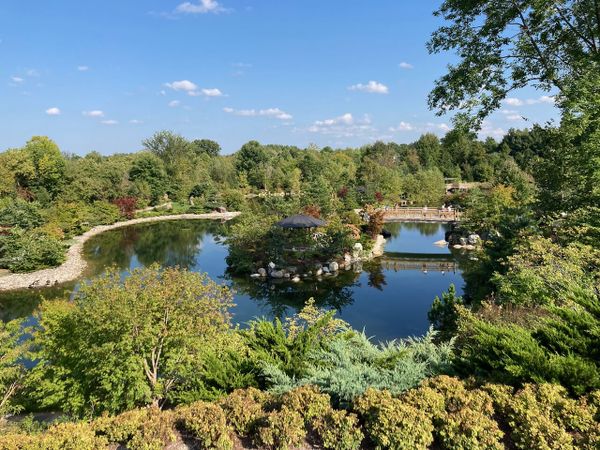 This past Sunday, I explored the Japanese garden at Frederick Meijer Gardens with my parents. Upon arriving at the entrance gate, my father said, “it’ll be quicker if we go this way.” This utterance took me aback. Why rush? We went to the garden to experience nature and calmness.

September 12, 2021I’ve run at least one mile every day for the past 784 days. What follows are reflections on my running streak. Whether you are thinking about starting to run or are currently running regularly, there are some nuggets in this article for you. Everything is based on

After writing for at least 5 minutes for 55 consecutive days, I abruptly stopped. Writing was one of my seven daily habits in January and February. While I still believe in the power of tiny habits, writing for as little as five minutes daily wasn’t serving me. It offered